During development, we may be creating and removing fields from our form design. This would eventually lead to having unused columns in the database table. In this exercise, we will discuss how to organize a table structure and eventually remove the unused columns.

For the purpose of this exercise, we will be focusing on the table named sample. In Joget's database, the table name is app_fd_sample.

Issue the following SQL to find out the exact structure of the table. With this information on hand, we would be able to better understand what columns are needed to be retained.

Some obvious column that we should purge would be:-

If you are doing this in a production server, then this step is absolutely needed. We should understand the data first before we perform any sort of cleanup/housekeeping. Below is a simple query to return 1 sample row. In a production environment, we should look at the entire dataset.

Finding Usages of the Table

By using the query below, we would be able to identify which app is using this table name.

Checking the usage of the table

As we can see from the result, there are 10 forms pointing to the table now.

Cleaning Up the Table through the Forms

With this information on hand, we can now manually go to each of the 10 forms and identify which column/field that is still needed and delete the unused field in the form itself.

We can swiftly open up the form in the form builder by putting replacing the parameters as shown in the screenshot below. 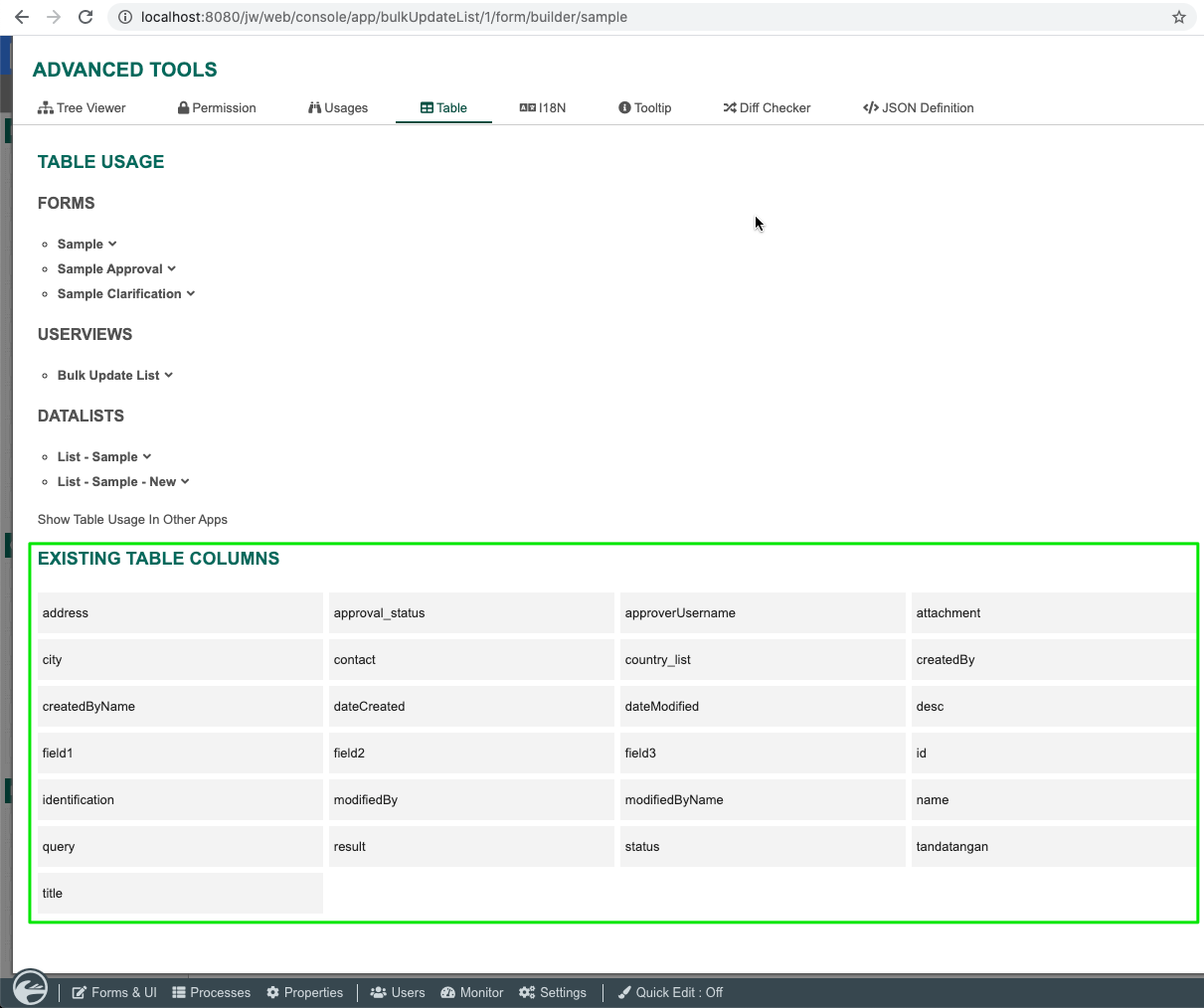 We can only click on "Show Table Usage In Other Apps" too to find out the table's usages of the table in other apps.

Cleaning Up the Database Table

After we have gone through all the forms in the previous step, we can now move on to the database itself to remove the unused columns. This step must be done manually outside of Joget.

For example, we have determined that we would be removing the 3 fields discussed earlier. We can issue the following SQLs.

Removing columns from the database

We will need to delete the hibernate mapping file created by Joget in the "wflow/app_forms" folder.

Look for the file with the exact same table name. In our case, we are looking for "app_fd_sample.hbm.xml"

This step is critical. This is so that Joget would transverse through all the forms that point to the table name to generate a new mapping file, which in turn, generates any missing columns back in the database table. By not deleting this file and force a refresh, Joget would continue to assume that the table structure is still the same as always.

There is no need to restart the Joget server for this. However, we would still recommend you to restart the server as the hibernate mapping files are cached for performance reasons. If you have dropped columns that are still being referenced to in any of the forms, Joget would fail to fetch the already deleted column and this would result in an error such as the following.